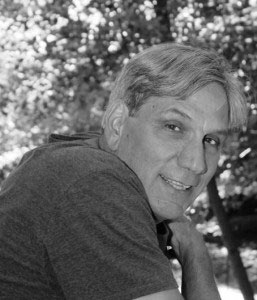 In 1979, Jerry Brunetti founded Agri-Dynamics with a vision of providing a line of holistic animal remedies for farm livestock, equine and pets. After witnessing first-hand the devastating results of conventional, chemically dependent, grain-based rationed farming practices, Jerry embarked on a crusade to educate and consult for farmers making the wise choice of transitioning to ecologically responsible and sustainable farming.

In 1991, Jerry co-founded Earthworks Natural Organic Products, a company which provides products and consulting services to the golf course and landscaping industries. Jerry’s aspiration was once again to encourage the implementation of ecological principles of balancing soils, reducing the use of pesticides and eliminating dependence on chemical fertilizers.

In 1999, Jerry was diagnosed with non-Hodgkin’s Lymphoma and given as little as six months to live without aggressive chemotherapy. He instead chose a holistic path of nutrition, detoxification and immune modulation and applied his vast experience with farming and animal nutrition to his own health. The links between healthy soil, truly nutritious food and profitable, sustainable farming techniques were clearly evident in his personal and professional experiences and his skill for communicating this to people has won him extensive praise from holistic health professionals, sustainable farming organizations and countless farmers and consumers.

Jerry was a highly demanded lecturer and speaker, both nationally and internationally, on topics that included soil fertility, animal nutrition and livestock health. He often spoke to audiences about the relationship of “Food as Medicine” and “Farm as Farmacy.” Jerry bridged natural and scientific understandings of plant and animal “ecosystems,” such as digestion in soils (decomposition), digestion of foods (fermentation) and the digestion that takes place in the GI tract of animals/humans. Jerry’s “connect-the-dots” systems approach helped farmers and ranchers understand how the health of people and their communities are linked to healthy land, healthy animals and healthy produce.

Prior to launching Agri-Dynamics, Jerry studied Animal Science at North Carolina State University and then moved to western Virginia to run a cow/calf operation. He served as Regional Dairy Director of the National Farmers Organization in the Northeast for five years. He served on the Lower Mt. Bethel Township Environmental Advisory Council for several years, the board of Pennsylvania Association of Sustainable Agriculture (PASA), was an honorary board member of the Weston A. Price Foundation as well as a steering committee member for the Lehigh Valley Chapter of the Weston A. Price Foundation and was also active in other community based organizations devoted to rebuilding local food systems and local democracy. In 2008, Jerry received the Leadership Award from PASA and the Eco-Agriculture Achievement Award from Acres USA. His DVD’s include “Keys to Herd Health,” “Holistic Veterinary Care” with Hugh Karreman, VMD and “Cancer, Nutrition and Healing” and his book The Farm as Eco-System was published in 2014.
Jerry courageously faced a second round of non-Hodgkin’s Lymphoma and his earthly existence ended on December 20, 2014, leaving behind a huge void in the eco-agricultural community. His “voice” is missed but his legacy continues. Lower Mt. Bethel Township has named their visitor and environmental center after Jerry to honor his efforts in having it built and also bringing three PA Scenic Byways to their township. PASA has named the new farmer training element of the SOIL institute after Jerry. Agri-Dynamics continues Jerry’s legacy and his vision by serving the sustainable farming community.

“A tribute to Jerry Brunetti” from Agri-Dynamics.

Jerry was a good friend of mine and taught me a lot of stuff the two years I got to work with him. I feel blessed that I had the opportunity to be one of his students. He passed away December 20, 2014 after a tremendous battle with cancer. He was the type of guy you would call to ask a simple 5 minute question and an hour lat-er you would still be on the phone with him. It was on one of these phone conversations that Agri-Tonic was born.

I was talking to Jerry about my personal horse that had a bad case of EPM and asked him what I should give her. Well, Jerry said that’s sim-ple, take these three products and mix them together and give her some in the morning and evening, in 2 weeks she will be fine. I was like yeah right you obviously don’t know how tough EPM is as I had tried numerous other products up to this point and nothing seemed to work. But I decided to try it and I had amazing results. So that’s how Agri-Tonic got started. We then took those three products and mixed in a number of other ingredients to make it even more effective and powerful. One important thing Jerry taught was the power of diversity. He would often say, Stephen you need diversity, you need to hit it from many different angles. I feel that is one reason why we get the quick response and results we do with Agri-Tonic, it has lots of diversity, lots of different ingredients and modes of action. So Thanks Jerry for everything you taught us…Rest In Peace….

What Our Customers Are Saying

We started feeding Agri-Tonic to our calves, never had a product that worked so good. We were having problems with scours and sluggish appetites. now they would drink three times as much milk. Better hair coat and overall better health.